Sold at James D, Julia  Inc. auctions in fall of 2006, here is one of the rarest Masonic All Seeing Eye’s seen on a John Ulrich model 1873. Both sides of the rifle on the fwd panels, centered in the center of a geometric diamond pattern “CROSS” is an “All Seeing Eye”

What makes this exceptionally unique is that this is the first time a “Masonic Eye” of such is on a documented signed gun my John Ulrich. But to not have been noticed until now for what the symbolism factually is representing is amazing because this is not hidden and can be seen for exactly what it represents with Freemasonry.

Pictured above you can see a traditional Masonic stepped pyramid in plain sight, where often its seen as a partial scroll on several documented Ulrich works on Winchesters! 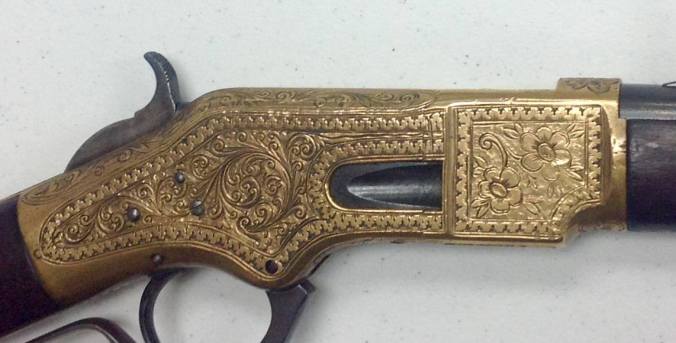 Thomas Winchester<<<<<CLICK ON THE LINK TO OPEN PDF DOCUMENT WITH IMAGES!

An Amazing rediscovery has been made from a very unique, undocumented Ulrich family custom engraved Winchester rifle. Featuring a Masonic Flower with an All Seeing Eye in the center of the flower. Where this exact design can be traced through the association of Herman Ulrich and his family with the American Banknote Company that was originally founded in 1795. But this design has evidence that predates the design prior to 1795 by the Philadelphia engraver Robert Scot who founded the American Banknote Company.

Pictured above is the Eye in the Masonic flower found a gentleman’s rifle, who requested help with identification of his rifes engraving on the Facebook site “Winchester Lever Action Rifle Collectors” group. The seal on the right is a fob seal that was unearthed by a professional metal detectorist Leighton Harrington in Boston Massachusettes, where a study dated his relic find between 1791-3 by John Vallance and James Trenchard. Trenchard engraved the first US Great Seal Eagle in his famous Columbia magazine in 1786 for the public to see the national coat of arms for the first time publicly, but its not an Eagle! The early US bird were manilpulated as the fire birds! Trencherd left America for England to never return in 1793 to carry out US Guild art work in the UK. Makers marks, dates of both Vallance and Trenchard date Mr. Harrington’s seal being made prior to 1793 and not before 1791 when Vallance came to America from Scotland. This is the first time in US history that a Winchester engraving design can be traced back through the American Banknote Company to the founder of that company, Robert Scot. Who was the offical US Mint engraver and Great Seal maker who was behind all conspiracy controversy with the US National Coat of Arms history associated to Freemasonry today.

Read the document on the link provided and see the rare makers marks of Rudolph Ulrich, his father Conrad and what is believed to be also his brother Johns letter initial mark. Zoom in and see the Harrington All Seeing Eye in the Flower, perfectly preserved after being in the ground  for well more than 100 years!