The newly found and understood, reference of the “Hearne Diary, Vol, 62 to 7a” from 1717 is located in the archives at Oxford University. The factual symbolism meaning now can translate the origins of the American Revolutionary War Rattlesnake symbolism, including all the United States American 13 Star’s & Stripes “Star Pattern” origins! The information presented is a big addition to my on going research with the “Webb Horn” Papers I wrote on the American flag origins.

Hearne documented that the Stuart Loyalist were using symbolism that depicted “The Self Eating Snake” that eats its tail. Representing “The Old Serpent of Spirit of Resistance” which is a the circular course of events to restore the Rightful King to the thrown. Except this course of symbolism evolved in America representing all the Stuart Kings from Charles I to Prince Charles Edward Stuart. Where from these devices of historical rattlesnake symbolism, we find the 13 Stars & Stripes was in use, years before the American Revolution Flag Act of 1777 with Contineintial Congress.

For the first time in US History, George Washington’s most famous flag with the mysteries associated to Betsy Ross and the 13 star circular pattern design. Now can be fully explained in great detail! The Washington flag does have direct history associated to Clan Ross, more directly to the Earl of Clan Ross (King Charles I), Stuarts had held the Earl of Ross titles since 1481 with James Stuart, son of King James III until the time of Charles I who was the last person to hold the title. The interesting connection is the fact that the husband of Betsey Ross, John Ross was the heir to the House of Balbair. Who’s direct bloodlines held the titles of the Earl of Ross, prior to the Stuarts taking the Earldom title of Ross. The Washington  13 stars & Stripes flag design with the circular star pattern that is associated to Betsey Ross symbolizes, King Charles I & II restoration symbolism of the snake devouring its own tail. Symbolism of a sovereign link, directly to God! The 13 star symbolism represents the Stuart King & his Order of the knights Garter. Based on Jesus and the 12 Apostles , even though members of the order have exceeded the 13 number or were short of 12 persons has been recorded.

The original portrait of Washington at Princeton by Charles Wilson Peal. Displaying thirteen stars being “6” pointed Stars, that represents royalty. The myth with Betsey changing the star  design to a “5” pointed star with a textile fold and one snip of the scissors is fantasy. The five pointed Star symbolism with Jacobite history, represents the last jacobite Stuart Prince, Charles Edward Stuart and the White Rose history of the White Cockade with the 1745 Uprising. The Attempt of the Bonnie Prince Charles Edward. trying to retake the thrown. One of the earliest American colony five pointed stars, used by a Colonial Governor with  Connecticut’s Colony, was the seal of  Governor Robert Treat. Governor Treat used a new seal with a heart and two arrows that pierced through a heart with a five pointed star. The symbolism is found on mourning lockets that are documented with Charles I. Treat had swore a loyalty to Charles II, all feared reprisal from Charles II who took the thrown back, after being exiled from England and his father was captured and condemed to death.

Regardless, the earliest preserved record of the circular snake with Charles was found with the English loyalist with Thomas Hearne thats known to date.

The “Hearne Papers” source information also allows all the lost American Revolutionary War symbolism of the Continental Currency and coins with chain link history to be exposed. Such as the first US silver dollar Chain Link coins and the fugio coppers with the chain links of the 13 states, giving the motto “We Are One”! Even George Washington’s Chain Link Inaugrual button designs are based on this symbolism of the self eating snake symbolism with the Civil Wars and Restoration history with Charles I & II.

This new information is an addition to what I already wrote on proving that the United States Symbolism, represented the deposed Kings of England, Ireland & Scotland. Specificially the Stuarts and their Order of the knight Garter symbolism that I have ready presented on this site & Electric Scotland. Relating to my on going personal research and findings with the United States Sovereign identity origins completes the factual lost symbolism of the USA. There is nothing vexillologists, button collectors. US government or British academics can do or say to defuse the Hearne papers that allow’s for the first documented time in American history! The “Truth” to the origins of the United States 13 Stars & Stripes originated from Charles I loyalist with the clubs and  nonjuror’s who refused to break their oaths to the Stuarts.

Jennie Brownscombe, an early 20th century painter, imagined the meeting of George Washington (seated) and Betsy Ross in her painting Examining the Flag. (Courtesy of Claude and Inez Harkins) This famous painting pictured above and the flag below, belonged to my very close flag researching associate, the Late Claude Harkin’s! The oval star pattern below represents an All Seeing Eye! Still it represents the same meaning associated to the snake that eats its tail in association to the Stuart Restoration symbolism. 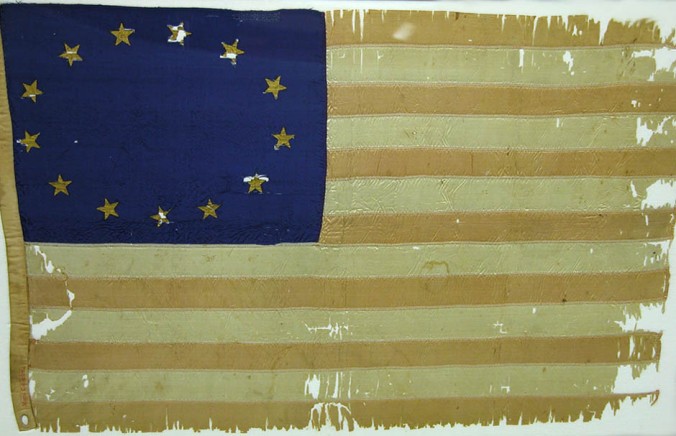 The Buttons below are cast by John Powell, who is the founder of ” Military Artifacts of Spanish Florida” an Internet Museum. Mr. Powell has allowed these images to be presented on this paper for education. Another one was metal detected in the 1970’s and found in England. Other Jacobite variations have the rattlesnake and were made in France for loyalist Jacobites in France and America years before the American Revolution. 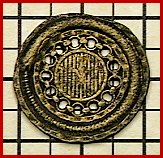 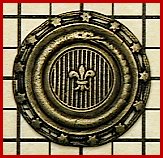 Both buttons were cast from originals, showing two Ouroboros snakes eating their tails. One was found on a Spanish Fort. One has to really look at these and grasp if these are snakes with symbols on the tails and symbols that represent a rattlesnake. Knowing these buttons originate from France. France was the stronghold for Jacobites exiled, along with the “deposed Stuarts”!

The English scholar Thomas Hearne, A nonjuror himself, who refused to take the oaths of allegiance to King George I and early in 1716 he was deprived of his librarianship, and “he was, in fact, locked out of the library”. However, he continued to reside in Oxford, and occupied himself in editing the English chroniclers. Hearne refused several important academic positions, including the librarianship of the Bodleian and the Camden professorship of ancient history, rather than take the oaths to the Hanoverian King and he stayed loyal to the Stuart Kings.The nonjuring schism was a split in the Anglican churches of England, Scotland, and Ireland in the aftermath of the Glorious Revolution of 1688, over whether William III (REMEMBER THE TERM DUTCH MASTERS) and Mary II could legally be recognised as sovereigns.

Thanks to Oxford University for preserving Hearne’s papers on the circular snake eating its tail, linking King Charles the Martyr with a direct “Link” to God symbolism. The entirety of filling in all the blanks with the striped flags and documents of Sir Charles Fawcett. The striped flag of the East Indian Company, and its connection with the American “Stars and Stripes” has to be acknowledged that its the flag of the Sovereign being the Stuarts. The Grand Union flag that George Washington at the out break of the American Revolution was a flag of Charles II while he was the King. The British Union is a Stuart flag and the stripes no matter how you see it symbolizes the true sovereigns being the Stuarts. Having been in use more than 100 years before the American Revolution.

Grand Union Flag is Pictured Above